​​In this exhibition Hermetic Landscapes the images follow a very simple presupposition. A mere exercise of imagination that until proven otherwise are among the infinite possibilities left open by Astrophysics regarding the existence of other universes parallel to the one we live in and the matter we are made of. These possibilities, although in the field of theory, raised by some currents of Astrophysics indicate as being a real possibility. Starting from the principle that other universes would have a probable and natural alchemical difference in its initial spark, its own Big-Bang, consequence and result in good measure different from our universe, either in its laws and physicochemical phenomena, in short, in its natural laws, leaving open an infinite field of ideas and hypotheses for the human imagination.  From that inexhaustible matrix, I launch these images as a proposal for one of those possibilities, which, in the light of what we know today, will be as possible and credible as any other, as scientifically irrefutable or as far from reality as any other. In this proposal of a parallel universe, what is put in common is the existence of solid planets, with their own morphologies and landscapes. Thus, the three photographs intend only to suggest three aerial landscapes of three of these distinct worlds.

João Pádua is a photographer who works as a freelancer since 2002, for some years he worked in various small jobs, but in 2005 he collaborates as a photojournalist in the magazine Grande Reportagem and in the supplement of the newspaper Diário de Notícias. After that he started to dedicate himself progressively to wedding reporting, always starting from a purely artistic perspective, in the first years as a collaborator for various companies until in 2008 he managed to establish his own clients and work as a freelancer. Along the way there are occasional collaborations with various newspapers and magazines, which resulted in images published in newspapers from 'Público' to the weekly 'O Gaiense' Vice Portugal, Casa International Magazine, House of Sandeman. He graduated in 2022 from the Escola Superior Artística do Porto. 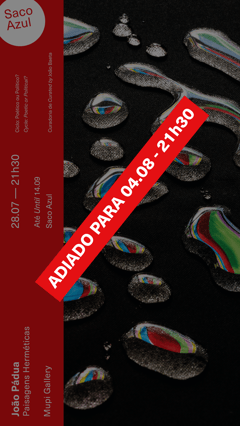